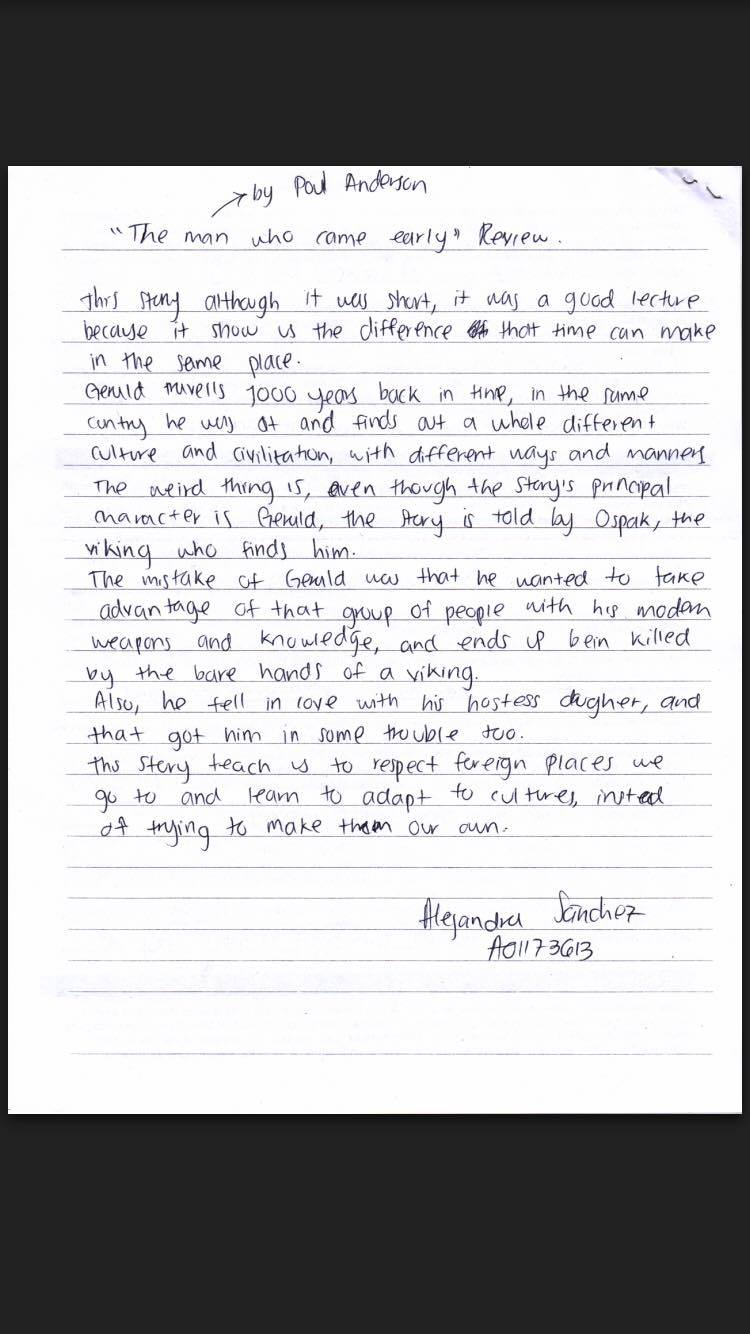 WRITE ABOUT AN ISLAND
Holbox island has the most beautiful and peaceful sea, its so relaxing to be there because all the citizens are used to welcoming tourists and although the town is kind of poor, the closeness with nature connects you incredubly with the tranquility of your own spirit.

IT'S WHO YOU MET AT A PARTY
There was this guy, I met at a party that a few days after I started to talk to him in my social media. He was so handsome and actually my total type of guy,… Continue

Write about an island

The island is very small and is artificially made. It was made by a rich guy to make his own country. But when he finally finished the island. The Chinese military invade the island annexing the island to china.

Write about something that comes in a box

Food, the best thing in the universe. Comes from plants. But these days it comes from a land far away in a wooden box for all the people to taste the delicious fruit. Also meat comes from animals but it's the same story nowadays with the meat, but baw with plastic well-closed boxes.

MY OPINION ABOUT SILENCE

So keeping silence is as important as knowing when to talk and when not to, because talking more than you need to is not good, because no one likes a person who is like that, and that is why i consider instead of always shouting to be quiet, we should be taught how to when to be quiet.

170625
It was Sunday, the time I saw him. His eyes were the first thing I saw. So deep, so attractive, so dangerous. His entire face structure was perfect. But then I cried. I cried because I remembered that I would never see him again, like I didn't see him today, or yesterday, or the day before. Never since his death.

170628
Changes are bad most of the times. There are big changes, medium changes and the worst: small changes. A small change in a tone of voice; a small… Continue

What are you looking for

SOMETHING TO HOLD ONTO.

I will like to hold onto my family because they have always helped me when i need to, and supported me with everything i tried, like boxing, swimming and all that. That is really what would i like to hold onto.

Out of the corner of my eye

Out of the corner of my eye I saw how the accident happen, I didn't have time to react when the car next to mine was crashed by a truck sending the car strait to mine. Include the move when the car smashed into my car and the time freezed. That is the only thing I remember until I woke up in the hospital.

Once I was fine to go to school after surgery of my knees. I walked as if I had pooped my pants. All my friends started to calling me "rodillas locas" and my best friend always called me rodicrazy.
It was very fun watching me trading to play soccer.

170607
The first thing I saw when my eyes opened after a nice night of sleep, was a big and brown box. It hasn't any information of the owner or its content. Just a big box. But it couldn't just be a box. I mean, someone brought it to me for a purpose. Maybe it's a gift, but my birthday was three months ago. What if it's a weapon ready to kill me? Or a virus that can end with the world? Well, let's find it out.

170610
A compromise is something you must accomplish no matter… Continue

"WHAT ARE YOU LOOKING FOR?"
Currently my life has become an unstopabble and yet frustrating search for weight loss. I've been on a diet for more than a year and althought I do have lost some weight, I always get it back and honestly I find it so difficult to be on a diet, mostly because I'm not seeing results. All that I'm looking for right now is to loose the extra weight I have and feel happy and comfortable with my own body. To learn love myself the way I am also.

SOMETHING THAT CAME IN A BOX.

Once my sister ordered some clothes and she waited like a month, she was desperate, when it finally came the box was filled with teddy bears, and in the moment she grabbed one and looked at it, a BIG BIG BIG BIG Iguana fell from the bear and went running into the bushes, we haven't found it since that day

WHAT AM I LOOKING FOR?

Fifty years ago, in a small village in the forest, a native girl found a glass ball that let her see the future.
She saw a group of men coming after her in a few moments for the glass ball so she ran away with it.
While she was running she fell and her knee hurt because it bled.
Although she was scared of being escaping, she knew she had to keep the magic glass ball at all costs.
When she got home safe and sound, she hide her little secret and often went to see the future as… Continue

ANGEL AND HIS MAGIC BOX

Once upon a time, in a faraway oxxo in the center of the city, a young boy called Angel was buying supplies, when he found a magic box.Angel entered the magic box, wishing it could fly him back to his house, so he started moving the box, looking for it to move.…

A long time ago, in a small city near the beach, a young girl found a golden necklace with a green charm in the sand. The necklace was beautiful, so she decided to wear it and keep it. The green charm began to shine and she felt a tickle in all her body, but quickly that tickle became a burning pain. She screamed desperately asking for help, but when no one cared about her, she ran to the sea. The burning pain was increasing while she was running, and the sea seemed farther than before. She… Continue

The Blood Stone: A Micro-Fiction

Once upon a time, in a land far away, a young prince found a wishing stone.
The prince rubbed the stone hoping he might be eligible for some free wishes. He cut his fingers on the sharpness of the stone and they hurt as he rubbed it so desperately. As he watched his blood dripping on the ground, he thought wishing could not help him, which meant he would have to…

Introduction of Time, Character, Place, and Main Prop. One ordinary day like all orthinary days Mike went to school and sit on the bench with his friends.

Character in action with Main Prop. Then all he's friends went to play soccer. But then he realized that he forgot something on the bench.

Physical and mental characteristics, and present situation. Then she was there sitting on the bench, she was so pretty he couldn't move his eyes of her. He was… Continue

The best scene in the movie frecuency