Today, I wake up at 5 a.m. in my home at Mexico City to run 1 hour in my gym. After that, I got to get dressed to go to my office and have breakfast with the board of directors and talk about how my company is going. These days I've been very busy, because of the projects that I'm developing, such as making a battery more efficient for power-walls while making them cheaper for the public, and starting my own university. My house is still under remodeling, it finally… 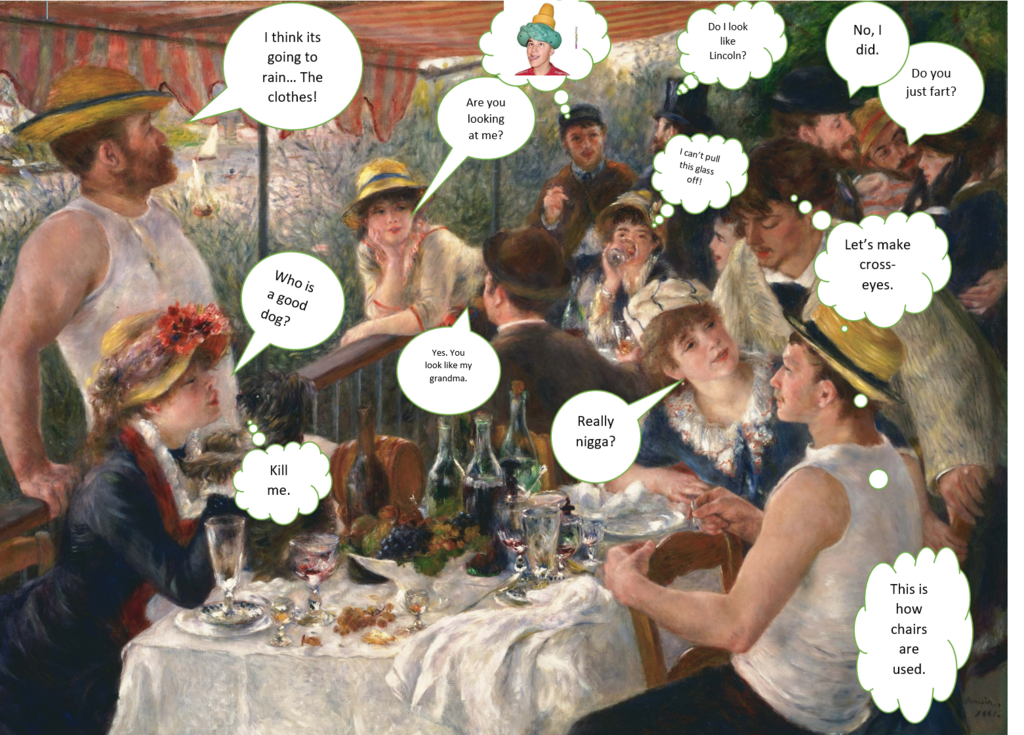 When I was 8 years old, my friends and I, used to make jokes to our classmates. Once, one friend brought a toy that sounded as if someone had farted, so we put it on a chair of a friend of mine, but suddenly our 80-year-old teacher sat there and felt embarrassed because she thought it was her fart

Let’s play soccer! The girl said while the little boy smiled. “You’ll be the striker, and I’ll be the goalkeeper,” she said, “kick the ball!” The boy did it, and the ball got stuck in a tree. After a moment, he climbed the tree with her.
One of the adults at a small party near there, smiled as he watched them trying to reach the ball.
“Oh, that boy seems to be very kind, he is always smiling and helping her sister,” he said.
The mother of the girl sticks her head from the… 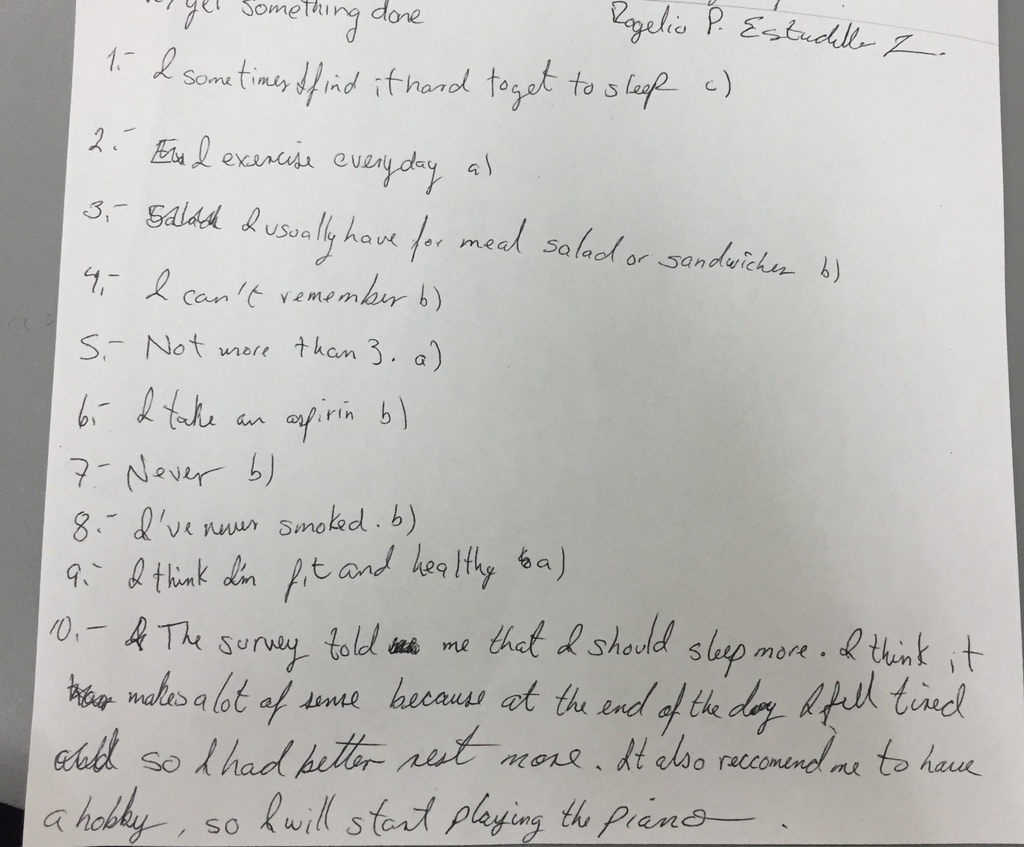 I think that the winner will be "The Shape of Water" because it has a great plot and amazing effects. Also, because its has incredible scenography and background, and last but not least, it was directed by Guillermo del Toro who is Mexican so that makes it even better.

I'm almost 100% sure that "Dunkirk" will win this award, because it has the best background and it was…

1. I have been photographed for a newspaper.

2. I do agree that in the future most people will work from their home.

3. I can explain how paper is produced.

4.  My watch was made in Switzerland

5. In my last birthday they gave me a new computer.

1. It was the end of the war between orcs and men, around 3625 in New York and there was a man named Michael searching for his wand.

2. Suddenly he find out that it was underneath his bed and then took it to make a speel in order to clean up his room

3. Michael had lost his wife and daugther during the war and he wonder if he can bring them back to life using the wand that he stole from an orc, the problem was that he didn't know how to do it and it was getting mad in the…

Greetings! How are you? I just want to congratulate you for your grades in school. I know that you've been putting a lot of effort and I'm glad the hard work is paying off.

About your problem I would recommend you to make pro/cons list in order to know what is better for you now and in that way take a better decision. I don't mean that you should not buy the game but probably this is not the right moment to do it, because you're still in school.

1.- A man wanted to be a doctor, but he couldn’t because he was blind.
2.- A woman wanted to marry a rich man, but she end up marrying a vagabond.
3.- the man was alive even though he fell from the roof.
4.- the woman seems to be a nice person.
5.- He plays in college by the time he works.
6.- She likes to drink tequila and also Vodka

I think that Iron Fist shortfilm was amazing and with a great topic. Also, I think that they put a lot of effort doing it and also editing FOR it to be nice. THUS, this was a great vidiomas and IN THE END I enjoyed it a lot, BUT also I think it could be better, maybe by adding more dramatic music and by doing SO also add more dialogue, AS LONG AS it doesn't lose the great script

When I was a child I used to eat everything. I mean everything. I ate grass, sand, paper, even little rocks! But suddenly one day I ate a mushroom and I got very sick. Throwing up was the only way I stopped eating everything and also that was the reason that made me hate mushrooms.

Two months ago, I moved to Tuxtla Gutierrez. First, it was a difficult thing to do because I liked my life in Mexico City. One day, the person who was my tutor told me that it was a new adventure and experience, and she was right. If I hadn't moved, I hadn't met new people.

13.
What can be inferred in the piece I read is that where the family is going Is to the beach . What makes me think so is that they took everything that's necessary to go to the beach.

26.
The author purpose in the piece I read is that never we should give up.

25.
The author purpose In the piece I read is that not everything that seems good is for us.

1.- Reflexive verbs: A verb is reflexive when the subject and the object are the same. EX: I wash myself. Or Kids, you must behave yourselves when we go into the museum.

2.- Phrasal verbs. A phrasal verb is a verb that is made up of a main verb together with an adverb or a preposition, or both. Typically, their meaning is… Continue

1.- Reflexive verbs: A verb is reflexive when the subject and the object are the same. EX: I wash myself.

I thought that the last picture (the one that shows a tennis court on the top of a skyscraper) was fake, but the teacher read that it was real, so it might be, even though it seems a very dangerous thing to do.

1.- Introduction of Time,Character, Place and Main Prop: Once upon a time in a faraway land a knight woke up with no memory, but only with a sword in his hands and his dead wife in front of him.
2.- Character in action with main Prop: He used to practice his movements and skills with a sword in order to improve his fighting skills, but that wasn't the sword he used.
3.- Physical and mental characteristics and present situation: He was very big and strong, but that day he was feeling… Continue

Last week I went to the supermarket with my best friend Jose and suddenly someone touched my back and saluted me, I was really impressed, I swear I've never seen his face before, but he talked to me as if we've been friends since childhood. Suddenly I remembered him, he was my neighbor when I lived in Puebla. I was so excited to see him so I invited him to hang out with us.